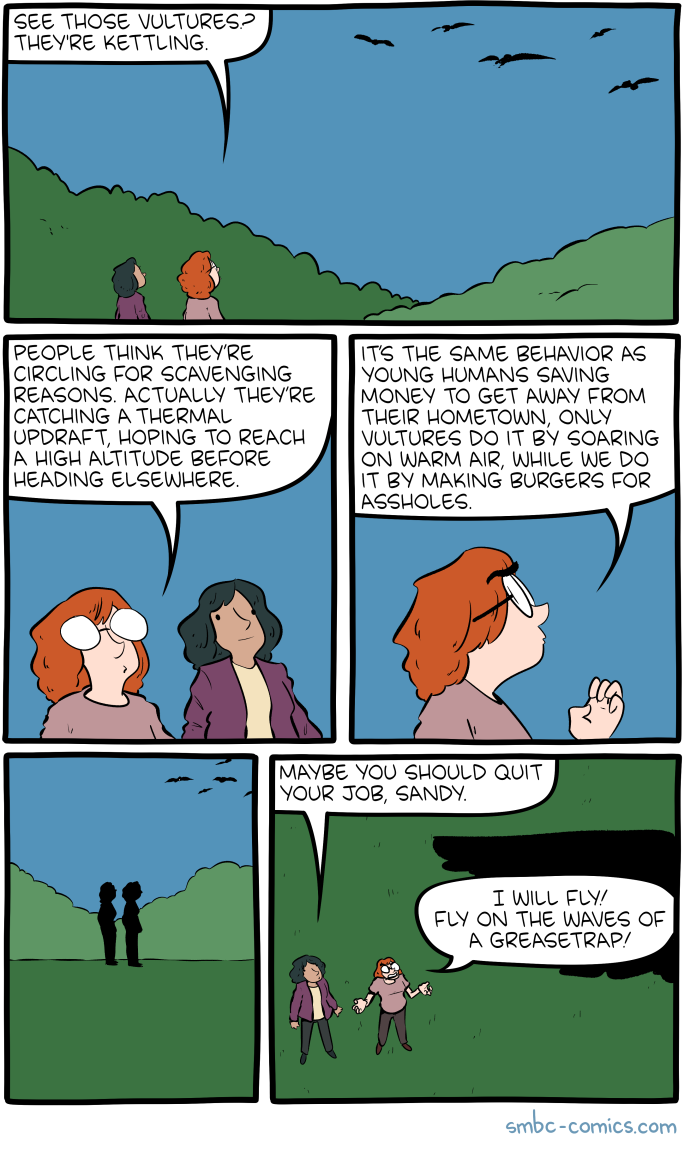 Hovertext:
I honestly don't understand why birders are all so happy. It's like constantly rubbing your face in human limitations, and then you don't even get to shoot the source of your suffering.

In the class I’m currently teaching on fantasy, we are moving from George MacDonald’s Phantastes to Lord Dunsany’s The King of Elfland’s Daughter. Phantastes is a classic quest romance, with the added dimension, as Harold Bloom pointed out in a justly famous early essay, that in Romantic and post-Romantic narrative any quest will be primarily an internal one, a psychological or spiritual searching.

More critics than I can readily count have said that Dunsany is the father of modern fantasy, but it’s very interesting in light of that claim to see how frequently he subverts the expectations of fantasy in all of its forms. For instance … well, why don’t you take just a few minutes now and read a very short story of his called “The Hoard of the Gibbelins”? I’ll wait.

See what he did there? One of the things that we always hear in quest romances, and in other forms of fantasy, is that the protagonist of our story is striving to succeed in an endeavor which many before him have unsuccessfully attempted. Our interest, then, in this protagonist is closely related to our belief that he will indeed succeed in his quest. But the protagonist of “The Hoard of the Gibbelins” does not succeed. It’s very shrewdly and wittily done.

Interestingly enough, the protagonist of that story has almost exactly the same name (Alderic) as the protagonist of The King of Elfland’s Daughter (Alveric). And that might suggest to us that Dunsany wants to play with the conventions and expectations of his chosen genre in that novel as well. Let’s take a look.

In the first chapter, the prince Alveric is given a task, a great Quest to pursue, and … he completes the quest by the end of chapter 3. The story has barely started, and it seems to be over. What that tells us is that Dunsany isn’t actually interested in Quest, at least not in any conventional way, and perhaps, at this point, we should remember that the name of this novel is not The Quest of Prince Alveric but rather The King of Elfland’s Daughter and revise our expectations in light of that title.

Some of you will know that long ago a scholar named A. J. Greimas – the OG Ayjay, as it were – declared that all stories are comprised of what he called actants. There were six of these, in three pairs: subject/object, sender/receiver, helper/opponent. In a standard quest romance, the Quester, however odd or ambiguous his quest, is always the subject. Thus our interest in Phantastes is always what happens to Anodos; we see the world through his eyes.

But in Dunsany’s novel things are different. One could say that in the first three chapters of the story, Alveric is the subject, the persons and things of Elfland as the objects, and various figures are helpers or opponents. The primary opponent seems to be the King of Elfland, the primary helper the witch Ziroonderel. But after the completion of his quest, Alveric recedes from the novel for quite some time and the focus moves elsewhere, primarily to the denizens of Elfland. At this point, we would do better to think of the subject of the story as Lirazel and the objects of the story as the things of our world – what Dunsany typically calls “the fields we know” –; and then we might see her husband, her son, and her father as helpers or opponents of hers. In MacDonald’s work women are almost always the helpers or opponents of men; but Lirazel is much more than that even if we can’t quite see her as in any simple sense the protagonist of the story.

It’s a very curious novel with shifting perspectives, and continual reminders that the understanding of one world is never to be given priority over the understanding of another, nor is the understanding of one character to be definitive for the readers. It’s full of sly subversions of the tropes of fantasy, often presented en passant. For instance, there’s a delightful little moment when a troll from Elfland comes to our world on his own Quest, happens to encounter a child, and suggests that perhaps the child would want to go to Elfland — from which, as we know from our fairy tales, she would never return. The child mulls the offer for a moment and then declines, because her mother has made her a jam roll and she wants to eat it. So nothing happens. The troll goes on about his business.

But we haven’t yet talked about senders and receivers. Here too Dunsany complicates things. At the outset the King of Erl sends his son Alveric to Elfland, and Elfland quite reluctantly receives him. But from that point on we are treated to a series of sendings and receivings, characters moving back and forth between Elfland and the fields we know, Elfland itself contracting and expanding — but hovering over it all are the three great runes of the King of Elfland: the magic he can send forth in power that no one can contest or deflect. The whole story builds to a final sending, a conclusive receiving.

It is a very strange book — it gets stranger the more you think about it — and is, I believe, a genuine masterpiece.

I was talking with someone yesterday about a project I've been sketching out about the sad songs we listen to and the stories we have about them, and she asked me what my saddest song was. Without hesitation I responded: "Farewell Transmission by Songs:Ohia."

It was the last song I played before shutting down Punk Planet, the magazine I founded and ran for 13 years. In many ways it was the hardest day of my life and the saddest song I knew. It was years before I could listen to it again. And while time has blunted the pain of it, and I've had many sad days since, the song still hurts something awful.

I'd written a short draft about that song and that day a few months ago as part of a writing exercise with Megan Stielstra, and since my conversation yesterday has me digging up those old ghosts, I thought I'd revisit it and share the work-in-progress here with you.

"The real truth about it is, no one gets it right."

Jason Molina's voice echoes across the cavernous walls of the dusty warehouse space we'd built into an office, built into a life. For years it had thrived and then it didn't and now it's as empty as the day we moved in. It was once alive with people and ideas and color and dreams and now it's just me and this sad song.

"Farewell Transmission," it's called, and today it very much is. A final song. It's mournful and empty and sounds like I feel, like I've felt for weeks. When it's done playing I'll take apart the stereo, disassemble the final desk in the office, turn out the lights, and lock the door. But until it's done, I turn it up.

The 18 foot walls I'd just stripped of shelves and posters—posters all the way up—have Molina's voice bouncing around them like a ricochet. There's drywall chunks all over the floor and piles of magazines in a dumpster outside. We'd given away as many copies as we could and still there were hundreds left, they'll end up in a landfill or molder in a pulp mill, quickly-decomposed artifacts of the only life I've known. A life that started as a teenager and a life that ended today, at 33, a scared new dad, broke in every sense of the word, with no idea what's next.

I didn't have a plan, I never have a plan. Things fall apart and you pick them up and hope that they'll fit together again, maybe not in the same way but at least in a way that makes sense to someone. Hopefully to you.

It's been years—decades—since that day. Since that moment where it felt like everything had fallen apart. (Everything had fallen apart.) I've built lives since then and some of those have ended too. That's how it goes, really, when you do things the way I've done things: a continuous cycle of starting and ending. You get used to it, sort of, but it never gets easy. Even with the years that have transpired, the lives that have been lived, that song continues to cut into me when I hear it, but I put it on sometimes: to remember, to mourn, to celebrate.

"The real truth about it is," Molina sings, his voice haunts the room back then and haunts my head still today, "we're all supposed to try."

Hovertext:
Note, this morning, when I have a lot of drawing to do, my stylus isn't working.

brennen
reply
Arguably, if we punched _enough_ computers, we could do something about a major source of our discontent.
Boulder, CO 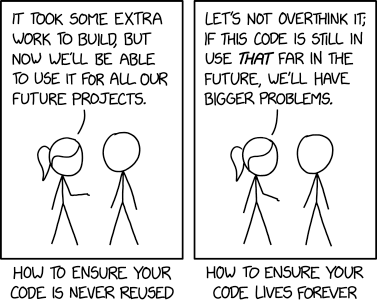 brennen
reply
There are people still running my code from the second column, and they have bigger problems.
Boulder, CO

Hovertext:
First told to an 8-year-old who pretended not to laugh.